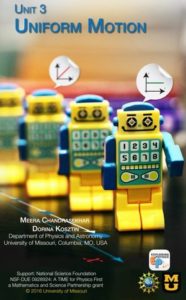 Through an engaging lesson, students observe and describe the motion of cars. Utilizing bubble tubes, students study uniform motion: measure the position of the bubble as a function of time, build a position-time graph, interpret its slope and calculate the speed of the bubble. They also learn to convert non-standard units to metric units. To reinforce concepts of position, distance, and change in position, students use a battery-operated car to develop motion diagrams. Students utilize technology to understand the difference between speed and velocity. By the end of the unit, students will be able to answer the following questions: