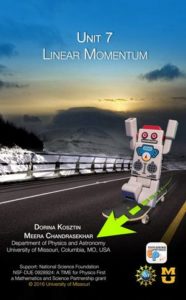 Building on knowledge from previous units, students study elastic and inelastic collisions using a variety of hands-on activities and labs. Students conduct simple activities to understand the concept of linear momentum and how it is connected to impulse, and to explore different types of collisions. Through qualitative and quantitative labs students investigate the conservation of linear momentum in elastic and inelastic collisions. By the end of this unit students should be able to answer the following questions: