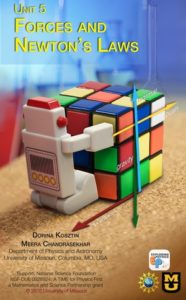 Building on knowledge from previous units, students connect forces with motion by utilizing a bowling ball and a broom. By investigating forces through a variety of hands-on activities and labs, students develop a mathematical relationship between force of gravity and mass, and between the elastic force and the stretch of a spring. Students then conduct labs to investigate the concept of inertia (Newton’s first law), develop the relationship between mass and acceleration (Newton’s second law) and conduct qualitative and quantitative labs to investigate the “equal magnitude but opposite direction” nature of action and reaction forces (Newton’s third law). By the end of the unit, students will be able to answer the following questions: